Most people with COVID-19 get better within weeks of illness, but some experience Post COVID Conditions which are a wide range of new, returning or ongoing health problems people can experience four or more weeks after first being infected.

Long COVID is a very bizarre disease and can have significant and debilitating effects on daily life. Many survivors who were initially infected at the start of the pandemic, Jan-March 2020, are still experiencing on-going and changing symptoms.

Some Common Symptoms Include:

What Is Long COVID?

Named post-acute sequelae of COVID-19 (PASC) by the Centers for Disease Control and Prevention, you will often see it called Long COVID or Post COVID Conditions.

Most people with COVID-19 get better within weeks of illness, but some experience Post COVID Conditions which are a wide range of new, returning or ongoing health problems people can experience four or more weeks after first being infected.

The individuals living with these symptoms are sometimes referred to as COVID-19 long-haulers.

What are symptoms of Long COVID?

Are there support groups?

Yes! In addition to our primary COVID Long-Haulers Support Group Canada community some provinces now have their own groups, creating hubs to connect with others specifically in your province. You can stay updated with local and provincial information, including new clinics.

Know what’s happening in your province.

Take Steps To Protect Yourself 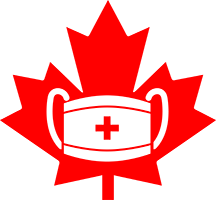 COVID-19 is a disease caused by a virus called SARS-CoV-2. Most people with COVID-19 have mild symptoms, but some people can become severely ill.

Although most people with COVID-19 get better within weeks of illness, some people experience post-COVID conditions. Post-COVID conditions are a wide range of new, returning, or ongoing health problems people can experience more than four weeks after first being infected with the virus that causes COVID-19.

Older people and those who have certain underlying medical conditions are more likely to get severely ill from COVID-19.

Vaccines against COVID-19 are safe and effective.

* Disclaimer: All content is for information purposes only. Although the info is from reliable and credible sources, it is not a substitute for medical advice. Please consult your doctor or other health care providers for answers to your own personal health care questions and needs.

Information to external websites and the content associated with them may change without notice. The data for COVID-19 is constantly evolving. Content will be updated as needed.

How does COVID-19 spread?

The Canadian Medical Association (CMA) also adds that along with respiratory droplets, spread is through:

Evidence suggests that spreading the virus from person to person is efficient when there is close contact. This is why physical distancing measures are so important to reduce transmission of the virus within the community.

The droplets vary in size, from large droplets that fall to the ground rapidly (within seconds or minutes) near the infected person, to smaller droplets, sometimes called aerosols, which linger in the air, especially in indoor spaces.

The relative infectiousness of droplets of different sizes is not clear. Infectious droplets or aerosols may come into direct contact with the mucous membranes of another person's nose, mouth or eyes, or they may be inhaled into their nose, mouth, airways and lungs. The virus may also spread when a person touches another person (i.e., a handshake) or a surface or an object (also referred to as a fomite) that has the virus on it, and then touches their mouth, nose or eyes with unwashed hands.

What are COVID-19 symptoms?

The Public Health Agency of Canada (PHAC) reports symptoms of COVID-19 can vary from person to person. They may also vary in different age groups.

People of all ages who experience fever and/or cough associated with difficulty breathing or shortness of breath, chest pain or pressure, or loss of speech or movement should seek medical care immediately.

Some of the more commonly reported symptoms include:

The World Health Organization (WHO) also states less common symptoms may include:

The Canadian Medical Association (CMA) also states elderly people may present differently depending on the severity of the illness. In some cases, it may manifest as confusion, lethargy or increased risk of falling.

Up to half of those infected with the virus will not experience any symptoms but could still pass along the infection to other people.

What are the symptoms in young children?

The Canadian Medical Association (CMA) says in very young patients, there have been reports of rashes and skin changes on the hands and feet.

The Public Health Agency of Canada (PHAC) reports some of the more commonly reported symptoms include:

Symptoms may take up to 14 days to appear after exposure to COVID-19.

Many may be mildly symptomatic for only a day or two.

Are there treatments for COVID-19?

Scientists around the world are working to find and develop treatments for COVID-19.

Optimal supportive care includes oxygen for severely ill patients and those who are at risk for severe disease and more advanced respiratory support such as ventilation for patients who are critically ill.

WHO does not recommend self-medication with any medicines, including antibiotics, as a prevention or cure for COVID-19. WHO is coordinating efforts to develop treatments for COVID-19 and will continue to provide new information as it becomes available.

Are antibiotics effective in preventing or treating COVID-19

In hospitals, physicians will sometimes use antibiotics to prevent or treat secondary bacterial infections which can be a complication of COVID-19 in severely ill patients. They should only be used as directed by a physician to treat a bacterial infection.

WHO states that micronutrients, such as vitamins D and C and zinc, are critical for a well-functioning immune system and play a vital role in promoting health and nutritional well-being. There is currently no guidance on the use of micronutrient supplements as a treatment of COVID-19.

WHO is coordinating efforts to develop and evaluate medicines to treat COVID-19.

(**Always check with your doctor and know if your body is deficient and requiring additional dosages. Some vitamins may interact with some medications.)

Can COVID-19 effect my organs?

The Centers for Disease Control and Prevention (CDC) states some people who had severe illness with COVID-19 experience multi-organ effects or autoimmune conditions over a longer time with symptoms lasting weeks or months after COVID-19 illness.

Multi-organ effects can affect most, if not all, body systems, including heart, lung, kidney, skin, and brain functions.

Autoimmune conditions happen when your immune system attacks healthy cells in your body by mistake, causing inflammation (painful swelling) or tissue damage in the affected parts of the body.

While it is very rare, some people, mostly children, experience multisystem inflammatory syndrome (MIS) during or immediately after a COVID-19 infection. MIS is a condition where different body parts can become inflamed. MIS can lead to post-COVID conditions if a person continues to experience multi-organ effects or other symptoms.

Additional emergency measures have been put in place to slow the introduction and spread of COVID-19 in Canada. Restrictions may change with little notice as the situation evolves. Refer to the latest travel restrictions in Canada.

What are COVID-19 variants?

When there have been several significant mutations to the virus then it’s called a variant. A variant is of concern when it affects:

The Public Health Agency of Canada works with the provinces and territories, and other partners to monitor and identify variants of concern in Canada.

Monitoring for genetic changes in the virus allows us to better understand the potential impact of the mutations. Overall, variants of concern represent the majority of recently reported COVID-19 cases across the country.

Current variants of concern in Canada include:

The B.1.1.7 (Alpha) variant continues to account for the majority of variants in Canada.

About the new variants

These new variants of concern include mutations that seem to make the virus more infectious, allowing it to spread more easily. They may also affect the severity of the disease.

At this time, there’s evidence that some variants may have an impact on certain drugs and vaccines. However, more research is needed to confirm these findings.

Given the limited data on the new variants, more research is needed to confirm these early findings. The Canadian and global medical, public health and research communities are actively evaluating these variants and other significant mutations.

Become a member and join thousands of long haulers in the fight against COVID-19!